Take this opportunity to learn about the Canadian territory, Nunavut.

Nunavut, which means "our land" in Inuktitut, the Inuit language, is Canada's largest territory, representing one-fifth of Canada's land mass. Nunavut was a part of the Northwest Territories until 1999, when it became a separate Canadian territory. 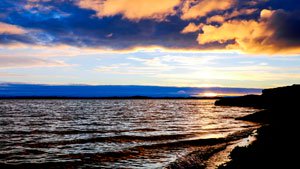 The province is located in Canada's artic circle and is made up of a mainland and many islands in the Arctic Ocean. Nunavut counts roughly 36,500 residents living in 25 communities ranging in population from 130 to over 6,500 in the Capital, Iqualuit. Native peoples of Inuit origin represent about 85 percent of the population, and form the foundation of the Territory's culture. About 50 percent of Nunavut's residents are under the age of 25. Located well into the Arctic, the average temperature in Nunavut in January is -30°C and in July is 10°C. Because of its latitude, the capital Iqaluit experiences 24 hours of daylight per day in June, and six hours per day in December.

Nunavut's economy is centered around the area's natural resources. Much of the Inuit majority of the territory maintains strong ties to the land and their livelihoods are then based on their traditional harvesting methods. The harvesting economy is worth at least $40 million annually and provides many families with an affordable and important source of nutritious food.

Supplementing these traditions are new opportunities, which are rapidly transforming the economy and creating many new jobs in Nunavut. Mineral exploration, focusing on gold, diamond, and base metal deposits, is a growing industry in Nunavut. In 2011, the gold produced at the Meadowbank mine had a market value of roughly $420 million. Additionally, fishing, tourism, and Nunavut's oil and gas reserves provide important and growing contributions to the territory's economy.

Due to the challenges of vast distances, a small but growing population, the high cost of materials and labour, and extreme climate make it costly to maintain Canada's high standards of living in Nunavut. Residents must cope with a cost of living that can be significantly higher than many other places in Canada. The average household income in the Nunavut area is over $65,500 per year. However, the minimum wage stands at $11.00/hr, the highest in Canada.

In addition, the federal government takes a number of initiatives to compensate for the high cost of goods and services in Nunavut to ensure that its residents can enjoy the same standard of living that is available to all Canadians.

In Canada, all citizens and permanent residents under the age of 20 are entitled to a free education provided in the public education system through to the end of secondary school. Nunavut's department of education provides a comprehensive educational program that runs from early childhood education through Grade 12. Schooling is available in English, French and Inuktitut. The system also provides a number of programs aimed at developing skills geared towards finding employment and contributing to the economy.

Nunavut has one post secondary institution, Nunavut Arctic College, with campuses in Iqualuit and other areas. The college offers a number of professional and academic programs in Inuktitut and English.

Nunavut has a fully comprehensive healthcare system, tailored to meet the unique challenges of low population density and difficult climate.

The area which is now known as Nunavut has been home to a continuous population of Inuit peoples for over 4000 years. Despite contact with Europeans as early as the 1500's and becoming part of Canada's Northwest Territories in 1867, the people of Nunavut for the most part continued with their traditional lifestyles. Today the Inuit language and culture are alive and well in Nunavut.

Nunavut became a territory of Canada official on April 1st, 1999, making it Canadaâs newest territory. Prior to this point the area which is now Nunavut had been part of Canada's Northwest Territories. While Nunavut entered into Canadian confederation in 1999, the beginnings of its formation actually lie much earlier. As early as 1976, land claims by the Inuit people led to discussions with the federal government on the division of Northwest Territories.

In 1982, a vote was held in the Northwest Territories which strongly approved such a decision. After a long period of discussions on boundaries, the agreement was ratified by 85% of the voters in Nunavut in 1992. It was decided that Nunavut would become a territory in 1999, to allow time to build capable administration.

The culture of Nunavut is strongly identified with the indigenous Inuit population. The Inuit people refers to a group of culturally similar indigenous peoples that inhabit the Arctic regions of North America. There are several Inuit languages, however the most common one is Inuktituk. Traditionally the Inuit way of life involved hunting and fishing, and confronting the challenges of survival in the Northern climate. While modernization has altered many of these traditions, the Inuit people take great effort to keep their culture alive.

Modern Nunavut is a mixture between the Inuit culture and modern Canadian culture. One can find there most of the same cultural interests one can find elsewhere in Canada, but also the unique Inuit culture. The Inuit culture is gaining increasing global attention because of its attitudes towards preserving nature and because their lifestyle is threatened by global warming.

With only approximately 36,500 residents inhabiting an area that occupies one fifth of Canada's total land mass, Nunavut has one of the lowest population densities in the world. Approximately 85% of the population is of Inuit descent. In addition the territory is host to other aboriginal First Nations and Metis communities.

Approximately nearly 7,000 people live in Nunavut's capital Iqaluit. The next largest community is Arviat, at just over 2,300. Most of the residents live in communities of under 1,500 people. This is in line with the maintenance of traditional Inuit communities in Nunavut.

At only 36,500 total residents, Nunavut does not receive a great deal of immigration on an annual basis. With the mining industry beginning to take off however, Nunavut is eager to attract skilled workers who can contribute to the growth of its economy. Many employers in Nunavut will pay an additional supplement to offset the higher cost of living in Nunavut.

As Nunavut is a territory of Canada rather than a province, the federal government maintains a greater control over its affairs than it would compared to provincial governments.  For those affairs that are under its control, Nunavut has its own democratically elected parliament located in the capital of Iqaluit.

Politics in Nunavut take a slightly different form than elsewhere in Canada. Nunavut's legislature does not feature any political parties. Rather representatives are elected independently to represent a certain geographic area. The parliament then operates by consensus, selected a premier from amongst their members. The current Premier of Nunavut is Peter Taptuna. In addition, the Premier has a council of 11 Inuit elders to advise him on incorporating Inuit culture and knowledge into his policies.

The first permanent settlement at Iqaluit was established in 1942 as an airbase and defense operation. While the Inuit had always referred to the area as Iqaluit, which means "many fish" (because of the abundant fishing stocks in the area), Canadian authorities named it Frobisher Bay after the body of water on which it is located. The name was officially changed in 1987.

As the capital city of Nunavut, government services are a major employer in the Iqaluit area. In addition the growth of mining and oil and gas operations in Nunavut means these industries are increasing their presence in Iqaluit. The city is growing at a rapid pace.

Canada intends to begin welcoming any fully vaccinated travellers starting on September 7, 2021, as long as COVID-19 remains under control.

Essential workers and international student graduates who applied for the new pathway to permanent residence are now able to get an open work permit while they wait for their application to be processed.