Take this opportunity to learn about the Canadian province of Nova Scotia.

Nova Scotia is one of the four Atlantic provinces of Canada and home to nearly 1 million people. Located on Canada's east coast Nova Scotia includes over 3,800 coastal islands in addition to the mainland territory. Halifax, with a population of over 400,000 people, is Nova Scotia's largest city and its political capital. It is also one of Canada's major seaports and a main gateway to the Atlantic Ocean. 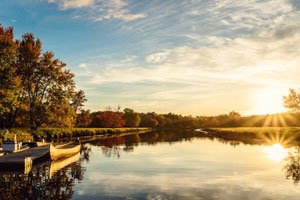 During the times when the majority of people arrived in Canada by boat, Halifax's Pier 21 was the place where nearly all immigrants to Canada first landed, making it an important landmark for Canadian immigration. Nova Scotia is also home to Canada's oldest African-Canadian community.

Where is Nova Scotia?

Nova Scotia has a very diverse economy that includes key industries in the service, manufacturing and mining sectors. Traditionally, many Nova Scotians made their livings from fish stocks of the Scotian Shelf. Unfortunately, however, fish resources have become endangered in recent years, heavily impacting the fishing industry. Recently, the Nova Scotia economy has successfully diversified, and with retraining many of those who had lost their jobs with the decline of the fisheries have found new jobs in Nova Scotia's growth industries. In September of 2006 this job boom drove unemployment in the province to below the Canadian average for the first time in the province's history. Halifax, as a large urban centre, is home to a wide array of industries and professions and its economy is the heart of Atlantic Canada.

Nova Scotia has a highly developed forestry sector as well as a highly specialized commercial agriculture sector. The mining sector is dominated by coal production. The province of Nova Scotia has recently begun to benefit from the extensive exploration of offshore oil and gas has been undertaken in the past decade.

Since the first commercial production of oil began near Sable Island in 1991, oil and gas revenues have increased significantly, helping to fuel the transformation of Nova Scotia's economy.

Tourism is also an important sector in the provincial economy. Almost two million visitors come to Nova Scotia each year, many of which come from outside Canada.

The cost of living in Nova Scotia is quite affordable, falling below the Canadian average. Combined with the comfortable average salary in the province, Nova Scotians can afford a very high standard of living. Provincial personal income taxes are approximately 15.8%.

One of the key elements of Nova Scotia's low cost of living is the affordable housing. The average price to purchase a house in the Halifax area is only $281,000, while a similar sized home in some of Canada's other major cities can be expected to cost up to twice that amount. Suitable and affordable housing is available. The average percentage of household income taken up by ownership costs is among the lowest in the country and varies between 21-32%, depending on the type of home involved.

All Canadians under the age of 20 are entitled to free education up to the end of secondary school provided by the provincial government. The Government of Nova Scotia provides free schooling from kindergarten through to Grade 12, available in both English and French. As with other jurisdiction in Canada, all teachers in Nova Scotia's public education system have a university degree as well as advanced teacher training, and follow a provincially regulated curriculum.

Nova Scotia has a comprehensive system of post-secondary education consisting of universities, technical colleges and apprenticeship programs. Nova Scotia's undergraduate tuition fees are the highest of any province, at an average of approximately $5,500.

Nova Scotia's post-secondary education facilities offer a full range of programs through its 11 universities and 13 professional colleges. Among these are Dalhousie University (the largest), University of King's College, Saint Mary's University, Mount Saint Vincent University and the Nova Scotia College of Art and Design, all in Halifax; and the Universite Sainte-Anne (Francophone) and Cape Breton University in Sydney.

Like all other provinces in Canada, Nova Scotia provides a publicly-funded health services program. The Nova Scotia plan insures eligible residents of Nova Scotia for all medically required physicians' services provided in the doctor's office, at home or in hospital.

The history of Nova Scotia extends back 11,000 years to the arrival of the original indigenous inhabitants of the region. Some of the descendents of these people would become the Mi'kmaq First Nation, who still play an important role in Nova Scotian life. The first Europeans to arrive in Nova Scotia were the Vikings, who are thought to have visited around the year 990. None would return until approximately 500 years later with the arrival of famous Italian explorer John Cabot, who landed in Cabe Breton in 1497. European settlement of Nova Scotia would begin approximately 100 years later with a French settlement at Port Royale.

From its early days before the formation of Canada as a country, Nova Scotia was a destination for immigration from various destinations. By the time Nova Scotia joined New Brunswick, Ontario and Quebec to form the Dominion of Canada in 1867, the province was home to a number of different cultural communities. This trend would continue throughout the centuries as many newcomers chose to stay in the Halifax area after landing there on their arrival to Canada.

An interesting part of Nova Scotia's history is the role that its residents have played in the aftermath of two major tragedies. When the legendary ship the Titanic sunk on its maiden voyage in 1912, several ships from the Halifax harbour would lead the way in the rescue attempts.

Again in the aftermath of 9/11 the residents of Halifax would play a key role in responding to a tragedy, as many airborne planes which were not able to land in the United States found themselves at Halifax International Airport. In true Nova Scotian style, the residents of Halifax opened their homes to stranded passengers, providing food, supplies and comfort.

Nova Scotia is known for having a friendly and welcoming culture that is a fusion of the many cultural communities that call the province their home. In particular some of the long-established groups that have left indelible marks on Nova Scotian culture include Scottish, French, Gaelic, Mi'kmaq and African-Nova Scotian. The result is a mixture that is distinctly Nova Scotian.

Nova Scotia is also home to modern cities that support bustling artistic communities. A unique blend of Celtic music originated in the province with such famous performers as Natalie McMaster and the Rankin Family. Halifax is home to a thriving modern music and theatre scene, producing many acts which have become quite popular across Canada and internationally.

Nova Scotia's population of nearly 1 million makes it one of Canada's smallest provinces in terms of population. However, due to its smaller land area, the province actually has the 2nd highest population density of any Canadian province, exceeded only by Prince Edward Island. A large proportion of Nova Scotians choose to live in the capital of Halifax and its surrounding suburbs.

The name Nova Scotia comes from the Latin language, meaning "New Scotland". It is no surprise then that the largest individual ethnic group found in the province is Scottish, with many of the province's residents identifying with Scottish heritage. The province is also home to large Irish, French, Arab, German, Dutch and Chinese communities. With Nova Scotia's natural population growth on the decline, the province can expect the majority of its future growth to be accounted for by immigration.

The province's program has a number of streams, including skilled workers, those who wish to come work in a family business and those with strong ties to a community in Nova Scotia. Recently the province has also begun strong efforts to encourage international students who graduate from the province's universities to stay and work in Nova Scotia.

Canada's government works on a federal system, with control over certain affairs belonging to the national government in Ottawa, and others under the control of the provincial governments.

The province of Nova Scotia has its own democratically-elected parliament (known as the Nova Scotia Legislative Assembly) which is found in the provincial capital of Halifax. In total 52 representatives are elected to serve the interests of specific geographic areas. The current government of the province is led by the Nova Scotia Liberal Party, headed by Premier Stephen McNeil who was sworn into office in October of 2013.

Halifax is not only the capital of Nova Scotia; it acts as the economic centre of Atlantic Canada. The population of Halifax is over 400,000. The city has long been one of Canada's most important ports, especially for new immigrants. Halifax's Pier 21, which was once the main entry point for newcomers to Canada, has now been converted into an immigration museum.

As a provincial capital, government at all levels is an important employer in the Halifax area. Along with the offices of the Government of Nova Scotia, Halifax is also home to central operations for Canada's Department of National Defense. Another major employer in the city is the Port of Halifax, one of the most important ports in North America. Like any major modern city, Halifax is home to a thriving service industry and many private sector companies. With the growth of offshore oil and gas production, this sector is becoming an increasingly important employer in Nova Scotia.

Halifax is a center for learning and culture. The city is home to a large number of post-secondary institutions, most notably Dalhousie University and Saint Mary's University. The community enjoys a bustling artistic scene, one which produces some of Canada's top musicians. Halifax has also grown recent years as a center for film production.

Here are the results of Canada's most recent Express Entry draw on September 28, 2022.

Following the most recent Express Entry draw on September 14, the minimum Comprehensive Ranking System (CRS) score to be eligible for an invitation to apply (ITA) through an Express Entry Program, dropped from 511 at the time of the draw to 510 the next day.