About Newfoundland And Labrador

Take this opportunity to learn more about the Canadian province of Newfoundland and Labrador.

Newfoundland is the easternmost province in Canada, and is one of the four Atlantic Provinces. The province is comprised of the island of Newfoundland, as well as Labrador, which is situated on the mainland, bordering Quebec. Newfoundland is home to a population of more than 525,000 people, the majority of which live in coastal fishing villages. 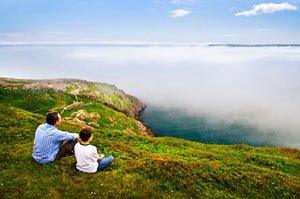 St. John's, the capital city and the historic commercial centre of the island, is by far the province's largest city, with a population of over 210,000. Other major centers of population are Grand Falls, Windsor and Corner Brook. Smaller communities often referred to as "outports" are more traditional villages that remain an important element in Newfoundland society.

Where is Newfoundland and Labrador?

Newfoundland and Labrador Economy and Employment

Newfoundland's economy is highly dependent on natural resources. The largest industry, fishing, has been adjusting to the depletion of fish populations, and the reduction of fishing quotas, since 1989 by developing new techniques and strategies, though the industry continues to face challenges.. The second most prominent industry in the provincial economy is the mining industry, with a gross value of mineral shipments of roughly $3.7 billion per year, mostly in the form of iron ore from Labrador. The third largest industry consists primarily of pulp and paper mills.

The energy sector is also an important part of the Newfoundland economy. The largest hydroelectric facility is located in Churchill Falls, Labrador. Newfoundland also has significant offshore oil reserves which are now being developed and extracted at an increased pace.

The province of Newfoundland faces challenges to overcome the decline of its fishing industry, which has traditionally been the center of the province's economy. With many residents having worked their whole careers in the industry, Newfoundland faces Canada's highest unemployment rate at 14.7%. The province is investing heavily in re-training programs and new growth industries, and is experiencing some success at moving its economy away from dependence on natural resources.

Newfoundland and Labrador Standard of Living

The high levels of unemployment in the province mean that the average income for families in Newfoundland is below the Canadian average, at $70,900. The mandatory minimum wage is at $10.25/hr. Provincial personal income taxes average out at just above 11%. At the same time, housing and heating costs, as well as the cost of living generally, are among the lowest in Canada. With employment in the province's modern industrial sector, one can live a comfortable lifestyle with a high standard of living.

Suitable and affordable housing is readily available in Newfoundland.The average price of a house in the province is approximately $276,760. In addition, the average percentage of household income taken up by ownership costs varies between 21-32%, depending on the type of home involved, and is among the lowest in Canada.

In Canada, all citizens and permanent residents under the age of 20 are entitled to free education through the end of high school through the public school system. Newfoundland and Labrador offers an excellent public education system for grades Kindergarten through 12. In addition, this system is augmented with government-funded early childhood education as well as adult education programs and apprenticeship programs.

The province's public post-secondary institutions consist of Memorial University of Newfoundland and the College of the North Atlantic. Average tuition fees rank second lowest in the country at slightly over $2,600/yr. There are also a number of privately operated, government-regulated Career Colleges throughout the province.

Under Canadian Law, all provinces and territories must provide universal, publicly funded health care to all citizens and legal residents of Canada. In other words, most basic health services in Canada are offered at no direct cost to the patient.

Certain procedures that are not deemed necessary (such as elective cosmetic surgery and a number of dental care procedures, for example) are generally not covered, but the list of services paid for publicly varies from province to province. Newfoundland, like the rest of Canada, has universal, publicly funded health care. The Newfoundland Health Plan covers all essential medical services.

The distinctive culture of Newfoundland is intimately linked heavily linked with the traditional importance of fisheries. Much of the population is found in coastal fishing villages. While the fish stocks themselves have depleted, the influence of this culture remains. Newfoundland has very strong communities and a strong provincial identity built during the time when it was an independent dominion. The outgoing and friendly nature of Newfoundlanders makes them well-liked across Canada.

While Newfoundland and Labrador has a population of just over 525,000, this figure is a slight decline from the province's peak at nearly 570 000 in the mid to late 1980's. The main reason for this decline is a combination of declining birth rates with an exodus of some of the individuals who were employed in the declining fishing industry.

Though unemployment remains high in Newfoundland and Labrador, the province is encouraging immigration of individuals with skills and assets who can help build the new industries emerging in the province. As the rebound continues and offshore oil and gas reserves increase in productivity, the demographic decline is expected to halt and reverse.

Through the Newfoundland And Labrador Provincial Nominee Program, the province helps select skilled workers and entrepreneurs who wish to settle in the province and gets them to Canada sooner. Through this program the government of Newfoundland and Labrador hopes to encourage more immigrants to bring their skills and human resources to contribute to the province's economic transformation.

The current government of the province is led by the Progressive Conservative Party of Newfoundland and Labrador and Premier Paul Davis. The House of Assembly has 48 representatives each elected to serve a geographic district.

With a population that now numbers over 210,000 residents, St. John's is located on the island of Newfoundland and serves as the provincial capital of Newfoundland and Labrador. The city is the oldest settlement founded by the English in all of North America. Famous explorer John Cabot arrived there in 1497. While it was established as a permanent settlement by the early 1600's, the number of residents would increase significantly in the summer as Spanish, Portuguese and French fishermen would sail over to take advantage of the excellent fishing in the area. The city would suffer several attacks in naval conflicts as well as the great fire of 1892, but the persistent residents continued to rebuild.

pWhile the fishing villages of Newfoundland have been losing some of their population, St. John's is growing, especially since the increase in oil and gas exploration. Thanks to the this new industry, St. John's is home to highest number of scientists and engineers of any city with a population under 1 million in North America.

Government of Newfoundland and Labrador

Newfoundland and Labrador Department of Immigration

Canada invited 545 candidates in the federal Express Entry pool to apply for Canadian permanent residence in a draw held on May 11.