Take this opportunity to learn about the Canadian province of New Brunswick.

New Brunswick is one of the four Atlantic provinces of Canada and home to approximately 760,000 people. The province is home to wide areas of unspoiled nature, as forests occupy the great majority of the province's land mass. New Brunswick also includes a number of coastal islands. 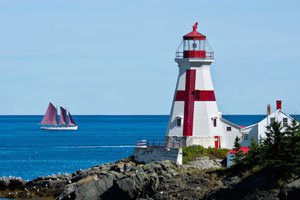 Saint John is New Brunswick's largest city (130,000), while Fredericton serves as the capital. The city of Moncton is another important urban center (140,000). New Brunswick is officially bilingual; as over 30 percent of the population speaks French as a first language, while most of the remaining 70 percent are English-speaking. While Canada as a whole is bilingual, New Brunswick is the only constitutionally bilingual province in the country.

Where is New Brunswick?

New Brunswick has a wealth of natural resources that have traditionally formed the center of its economy. With its vast forested areas, lumber products are one of the main exports. Today New Brunswick is home to a modern service-based economy, with major financial and insurance industries leading the way. Canada is investing heavily in encouraging these modern industries in New Brunswick to combat unemployment in fishing and agriculture, which also remain important industries. Many companies are choosing to locate customer service and technical support call-centers in New Brunswick because of the availability of bilingual staff. Information technology has also been a growth industry for the province, and a major beneficiary of investment.

Manufacturing is also a major employer in the province and has been on the rise in the recent years. Much of the heavy industry can be found in Saint John. Leading the manufacturing industries are food and beverages, followed by pulp and paper furniture, metal processing and transportation equipment. The province has also enjoyed increasing tourism as people come to take in the provinces natural beauty. Tourism has been a major source of job creation in the last decade.

The low cost of living in New Brunswick means that even with a modest income, one can live a comfortable life. Average income for New Brunswick families is $65,910, among the lowest in Canada. At the same time, housing costs, as well as the cost of living generally, are among the lowest in Canada. The cost of heating, power and food are likewise substantially lower than almost anywhere in North America.

The mandatory minimum wage is currently at $10.30/hr. Provincial personal income taxes are slightly above the Canadian average.

New Brunswick is known for having a strong sense of community. Residents have built a warm and friendly atmosphere to the province that is recognized instantly by visitors. The province is also very safe, with crime rates far below the national average.

Suitable and affordable housing is readily available in New Brunswick.The average price of a house in St. John is approximately $160,000. In addition, the average percentage of household income taken up by ownership costs varies between 21-32%, depending on the type of home involved, and is among the lowest in Canada.

In Canada, all citizens and permanent residents under the age of 20 are entitled to free education through the end of high school through the public school system. As a bilingual province, New Brunswick has parallel public school systems in both English and French for kindergarten right through to Grade 12. New Brunswick is a leader in the use of technology in education, and 100% of its public schools have internet in the classroom. The province has the highest high school graduation rate in Canada at more than 86%.

Postsecondary education in New Brunswick is provided by four publicly funded universities; a community college system, two specialized institutes, a number of small, private denominational colleges, and various private schools that offer career-oriented training. New Brunswick has the third highest undergraduate tuition fees of Canadian provinces, at an average of around $5,500. To help pay for post-secondary schooling, The New Brunswick Department of Education oversees provincial loans, achievement grants, and bursaries for Canadian citizens and permanent residents. Each of the universities and most of the community colleges also offer a variety of scholarship programs for students in financial need or of exceptional academic merit.

The universities in New Brunswick are of top quality, and are playing an important role in the transformation of the province's economy from natural resources to advanced service and technology. The University of New Brunswick is one of the oldest universities in Canada and has top-rated programs in engineering and computer science. Mount Allison University, located in Sackville, is consistently ranked tops amongst small universities for its education, and has produced more Rhodes Scholars per capita than any other school.

Under Canadian Law, all provinces and territories must provide universal, publicly funded health care to all citizens and legal residents of Canada. In other words, most basic health services in Canada are offered at no direct cost to the patient. Certain procedures that are not deemed necessary (such as elective cosmetic surgery and a number of dental care procedures, for example) are generally not covered, but the list of services paid for publicly varies from province to province. New Brunswick Medicare pays for most medically required services provided by medical practitioners. In addition to Medicare, health insurance can be purchased from major private sector insurers.

New Brunswick was one of the first areas of Canada to be explored and settled by Europeans. French Explorer Jacques Cartier first arrived in the area that now makes up New Brunswick in 1534. French settlers would return about 70 years later to create the colony which would be known as Acadia. These settlers, along with other French colonists who came to the region from such places as Louisiana, are the ancestors of New Brunswicks present day Francophone population.

At the end of the American Revolutionary war, a number of people living in the American colonies who wished to remain loyal to the British crown fled north to New Brunswick. This group is known as the Loyalists. While many of these refugees were of British origin, many were also immigrants from other places such as Germany and the Netherlands who preferred to be in a British colony, as New Brunswick was at the time. The descendants of this group form a major portion of New Brunswicks residents.

New Brunswick was one of the original four provinces to join Canadian confederation in 1867. Since then the divide between Anglophone and Francophone residents of this province has softened and the result is a truly bilingual province. New Brunswick is now in the midst of an economic transformation. While natural resources are still a major export and employer, more and more New Brunswick residents are working in the service sector.

New Brunswick has a rich cultural heritage from both its Francophone and Anglophone communities, along with the contributions of generations of immigrants from all over the world. As one of the longest established areas in North America, New Brunswick has cultural and academic institutions that have produced and attracted top artists and thinkers. The Acadian community retains its unique culture and dialect, and has produced some notable poets and writers.

New Brunswick provides a taste of traditional, friendly, rural communities alongside modern cities. The province prides itself on cities with world-class culture and vibrant festivals while retaining a hometown hospitality. This combination has proven very appealing to many immigrants who come to work in the province and soon decide to stay and settle there.

New Brunswick is home to approximately 760,000 residents. As this population has remained relatively steady for approximately two decades, the province is looking to encourage immigration to fuel population growth in its cities as they push forward in building an advanced modern economy. New Brunswick has not received the same levels of immigration as Ontario or British Columbia, but it has received a steady stream of newcomers from various places in the world. Today there are small but vibrant immigrant communities contributing in each of New Brunswick's major cities.

French Canadians account for approximately 30% of New Brunswick's population. The remainder is primarily English-speaking but claims origins not only from the British isles but also from Germany, the Netherlands and China for example. New Brunswick's aboriginal population consists of primarily the Mi'kmaq and Wolastoqiyik nations.

Canada's government works on a federal system, with control over certain affairs belonging to the national government in Ottawa, and others under the control of the provincial governments.

Saint John is the largest city in New Brunswick, with approximately 130 000 residents. Saint John is a very bilingual city split rather evenly between English and French as working languages. The city's residents are very proud of their individual neighbourhoods, and tend to identify strongly with them, creating a sense of smaller communities within the larger city.

Saint John has a strong industrial base and is home to the greatest concentration of industry found on the Atlantic Coast anywhere north of New York City. In recent years the city has seen a significant amount of redevelopment that has revitalized lands formerly used by the railway. The result is an increasingly vibrant city that is attracting businesses in the service industry.

The provincial capital, Fredericton is home to approximately 95 000 people. Government and education are the main employers in the city, with both federal and provincial administration as well as two universities, the University of New Brunswick and St. Thomas University. With a strong student population, the city has a lively culture and is known for its annual Harvest Jazz and Blues festival which attracts international artists to the city. The city also has a growing Information Technology sector, helped by its high percentage of residents with post-secondary education

The city of Moncton is the second largest city in New Brunswick, home to roughly 140 000 people, just slightly less than Saint John. It is not likely to stay in second place for long however, as it is the fastest growing urban area east of Toronto. The majority of Moncton's residents speak English, but nearly 35% of the residents primarily speak French. The only cities in the country that are as bilingual as Moncton are Ottawa and Montreal. Moncton is also home to the Universite de Moncton, the largest French-language university in Canada outside of Quebec.