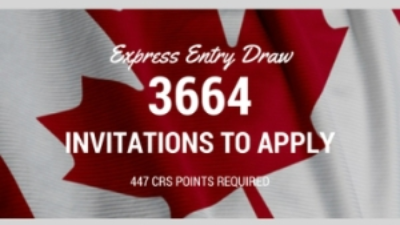 The latest Express Entry draw for immigration to Canada has broken new ground, with the Comprehensive Ranking System (CRS) point threshold dipping below the 450 mark for the first time ever. In total, 3,664 candidates in the pool with 447 or more Comprehensive Ranking System (CRS) points were issued an Invitation to Apply (ITA) for Canadian permanent residence on February 8, 2017.

Not only was the CRS requirement lower than ever, but the number of ITAs issued was greater than in any other draw that has taken place since the Express Entry selection system was launched more than two years ago.

The first few weeks of 2017 have seen a massive increase in activity within the Express Entry system. Through the latter half of 2016, Immigration, Refugees and Citizenship Canada (IRCC) representatives made a number of comments suggesting that 2017 would see a more robust system in which more ITAs are issued. In addition, IRCC added that significant improvements made to the system last November would allow more candidates to be invited to apply based on their human capital, skills, and experience.

Among these improvements were changes made to the number of points awarded for a qualifying job offer. in most cases, candidates with a job offer receive 50 points (though 200 points are available for certain senior managerial positions) — down from 600 points before the changes were introduced.