Mexican Citizens are now Eligible for Visa-Free Travel to Canada 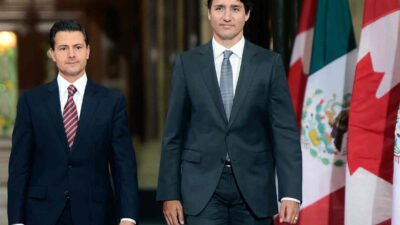 For the first time since 2009, citizens of Mexico may travel to Canada without having to apply for a visitor visa (Temporary Resident Visa, or TRV) beforehand.

Canadian Prime Minister Justin Trudeau first made the promise to lift the visa requirement during the 2015 election campaign, before formally announcing the new policy during a two-day state visit by Mexican President Enrique Pena Nieto in June, 2016. The two heads of government also announced plans to lift Mexico's ban on Canadian beef imports.

Trudeau has previously stated that “This move will make it easier for our Mexican friends to visit Canada while growing our local economies and strengthening our communities.”

He also mentioned that “Canada is pleased to deliver on the government’s commitment to lift the visa requirement for Mexican nationals. We look forward to the social and economic benefits that lifting the visa requirement will bring to both countries, especially to the middle class here in Canada.”

The relationship between Canada and Mexico is long and deep. The countries, along with the United States, implemented the North American Free Trade Agreement (NAFTA), which came into force in 1994. According to the 2011 census, the Mexican diaspora in Canada numbers 317,000.

Data from Statistics Canada for the first seven months of 2016 showed a 17 per cent increase in travel from Mexico to Canada year-over-year. It also noted that this September, Aeromexico, the flag carrier in Mexico, announced that as a direct result of the lifting of the visa requirement as of December 1, the airline would increase flights to Canada by 47 per cent. This could translate into a potential additional 9,900 passengers per week from Mexico to several major Canadian cities.

Last month, federal Immigration Minister John McCallum said the visa could be "reimposed" if the number of asylum claims spikes as a result of the policy change, but did not specify what number of claims would trigger a reversal.

"Canada retains its sovereignty on this issue. There comes a point where it would become unsustainable, but we are hoping that point will not arrive," said McCallum.

A senior official in McCallum's office added that IRCC is working with Mexican counterparts to ensure a successful visa lift.

"This includes measures to identify and deter irregular migration. As with all visa lifts that Canada undertakes, IRCC will carefully monitor migration trends, including asylum claim rates, coming out of Mexico once the visa is lifted," said the official.

The eTA process, as compared to the process of applying for a TRV, is typically a simpler and cheaper process. Mexico will join other countries around the world that have an agreement with Canada whereby its citizens do not need to apply for a visa before visiting Canada.

Visa-exempt individuals who wish to enter Canada by air are now required to obtain an eTA before they board their flight. This system was first introduced in August, 2015, and became mandatory on November 20, 2016 after a lengthy leniency period came to an end.

Individuals requiring an eTA in order to visit Canada asked to fill out some personal information and answer a few basic questions relating to criminality or medical issues.

To complete the online form, you need:

An eTA is an electronic document linked to an individual passport. The application process is completely online, though a paper application may be made in certain cases. Once an individual receives their eTA, it is valid for five years or until the individual’s passport expires, whichever occurs first. The process is usually fast — the eTA may be approved within minutes — although it is recommended that travellers apply in advance of their flight in order to avoid delays. Already, certain travellers have been taken unawares and have missed flights because the application process took longer than expected.

To find out if you need an eTA or TRV to visit Canada, use our Visiting Canada Tool.

If you have any questions or concerns about the process of obtaining an eTA and gaining entry to Canada, please send a detailed email to eta@canadavisa.com