Take this opportunity to learn about the Canadian Yukon Territory.

The Yukon, is the westernmost and smallest of Canada's three territories, located in Canada's Northwest. The name of the province comes from the word for "great river" in the aboriginal Gwich'in language. The Yukon has a population of approximately 37,000, roughly 75% of which live in its capital city Whitehorse (over 28,000). About one quarter of Yukon residents are of Aboriginal descent and the Yukon is home to fourteen of Canada's First Nations, speaking eight different languages. 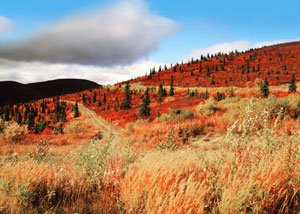 The Yukon is situated above the Arctic Circle, bordering the U.S. state of Alaska. Average temperatures in Whitehorse range from -18 degrees Celsius in January to approximately 14 degrees in July.

Where is the Yukon?

The economy of the Yukon is based heavily on its rich natural resources. Mining is the Yukon's largest industry. The importance of mining to the Yukon dates back to the end of the 19th century when a sizable discovery of gold led to the Klondike Gold Rush which saw between 30,000-40,000 people arrive in the territory in mere months, an event which set in motion the creation of the Yukon territory itself.

Business and administrative occupations make up the community's second-largest employment field after natural resources. In addition, government is a major source of economic activity in the capital city of Whitehorse, accounting for a significant portion of total employment. The economy of the Yukon has been gradually diversifying, and tourism now provides a sizeable portion of Yukon jobs and services. Unemployment in Whitehorse currently sits at roughly 7%, but varies seasonally.

A major portion of work in the Yukon is done on a seasonal basis, and standard weekly earnings exceed the Canadian average. In addition, the Yukon has no territorial sales tax. The minimum wage is currently $10.86/hr.

One of the more appealing aspects of the high standard of living in the Yukon is the affordability of owning your own home. Suitable and affordable housing is readily available in the Yukon. Real estate sales show housing prices in Whitehorse to average roughly $384,500. Prices range significantly according to neighbourhood.

Throughout Canada, all citizens and permanent residents under the age of 20 are entitled to an education through to the end of secondary school provided by the government free of cost. The Yukon territory provides a comprehensive public education program from kindergarten through to grade 12. In addition, the public school system has extensive apprenticeship and co-operative education programs to build work skills in youth. The Yukon Territory's schools follow the curriculum developed by the neighbouring province of British Columbia.

The Yukon has one Post Secondary institution, Yukon College, which is located in Whitehorse. It offers university credit programs in arts, sciences, and northern studies, as well as programs in renewable resource management and environmental officer training.

Trades programs are available for apprentice-level and pre-employment training. Computer studies, business administration, office administration, tourism and culinary arts are available. Yukon College is also a member of the University of the Arctic, an international network of higher-education institutions around the North Pole region.

The Yukon Territory was born out of the Klondike gold rush of the late 19th century. Initially, the area which forms the Yukon had been part of Canada's Northwest Territory. In 1896 however, a major discovery of gold along the Klondike River brought a huge influx of people hoping to strike rich quickly. Over the course of less than a year, between 30,000-40,000 people arrived in the Yukon, into an area that had been sparsely populated. The response of the Canadian government was to create the separate territory of the Yukon, in order to manage the expanded population.

After a few years, many of the new arrivals to the Yukon had left, however mining in Yukon was only beginning. The Klondike gold rush stimulated a wave of exploration that led to two other smaller gold rushes in later years. Mining continues to play a major role in the economy of the territory today, taking advantage of the regionâs gold, lead, silver and zinc deposits.

The culture of the Yukon incorporates all the aspects of modern, multicultural Canada with the adventurous frontier spirit that defined the individuals who arrived in search of fortune during the Klondike gold rush. This spirit helps to make for a warm and lively community in the midst of a climate that can be harsh. These small but welcoming communities have a unique identity kept alive by tradition.

The Yukon today is home to roughly 37,000 people. The population of the territory has fluctuated significantly over the years with the discovery of new mineral deposits, though none as much as the initial Klondike gold rush.

First Nations people account for nearly a quarter of the territory's residents, one of the highest proportions of any Canadian province or territory. The population of the Yukon is also very multicultural, with its residents coming from all over the world. Approximately three quarters of the territory's population lives in the capital, Whitehorse.

With a very small population, the Yukon is not a major recipient of new immigrants. However, much in the way that many newcomers arrived during the Klondike gold rush, immigrants continue to arrive in the province to take advantage of economic opportunities, particularly in mining. Nonetheless the current territory of the Yukon, like the rest of Canada, has been shaped strongly by the contributions of immigrants to the territory.

Immigration to the Yukon today is mainly to the capital city of Whitehorse. To attract immigrants that can contribute to the territory's economic development, the Yukon has a Provincial Nomination Program which can help immigrants who wish to settle in the Yukon to get to Canada faster.

As a territory rather than a province, the Government of the Yukon has a more limited jurisdiction than its provincial counterparts in Canadian confederation. The Yukon does have elected representation in both houses of Canada's federal parliament as well as its own democratically-elected parliament. There are 18 representatives in the Yukon Legislative Assembly (located in the capital of Whitehorse). The territory has been led by Premier Darrell Pasloski and the Yukon Party since May of 2011.

As the capital of the Yukon, the city of Whitehorse is home to just over 28,000 people. The city is named after the nearby White Horse Rapids, which are said to look like the mane of a white horse. The city has been the capital of the Yukon since 1953, when it took over from Dawson City. The main industry and employer in Whitehorse is government services, with the mining industry at a close second.

Whitehorse acts as a major cultural centre for the region. The city has hosted man editions of Canada's arctic winter games, and will soon host the Canada Winter Games, a major sporting event that attracts many of the country's top athletes. In addition, the city has a bustling cultural community, hosting such events as the Frostbite winter festival, an event which warms the city with music in the midst of its harsh winters.

The Government of Yukon